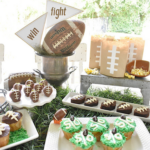 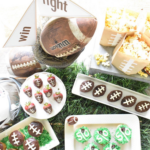 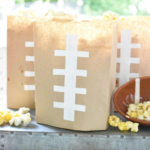 My dinner club group is sharing our menu today for our football tailgate party theme. Since I was responsible for the dessert this month, and had so many ideas for easy desserts for a football party, I decided to do a dessert bar. Let me show you some fun ideas and how to make an easy football party dessert bar.

If you missed our football tailgate party tablescapes and inspiration, be sure and take a look. There were some very fun and creative ideas. You can see that post here.

This post contains affiliate links, which means if you purchase something, I will make a small commission at no additional cost to you. Thank you for supporting my blog. You can read my full disclosure here.

And if you want to see any tablescapes you have missed the past few months you can click the link to see any of those.

Red, White And Blue Tablescape – this would be fun for the upcoming Labor Day Holiday.

why a dessert bar??

First of all, I want to stress that I wanted this dessert bar to be fun and simple to create. I don’t know about you, but if I am hosting a football watching party, I want to be involved with the game and visiting with my friends, and not spending a lot of time in the kitchen.

I came up with several make ahead recipes and ideas and used some decorations I had on hand to create my dessert bar.

This dessert bar would be fun for a themed football birthday party, a Super Bowl party or any game day or NFL party.

I melted the wafers in a glass bowl in the microwave and dipped the strawberries one at a time in the melted chocolate.

I carefully placed them on a cookie sheet lined with waxed paper until the chocolate was hardened.

Next, I put vanilla frosting in a sandwich bag, cut the very tip of the bag off and used this to pipe the threads on the strawberries.

For my “football” brownies I used a store bought brownie mix. Again, I wanted this to be simple, but you could obviously step up the game and use your favorite homemade brownie recipe.

When the brownies were cooled I used a football shaped cookie cutter and cut my football out.

I used the same method as the strawberries and piped the threads on. And, that’s it!!

I used microwave popcorn and divided the popcorn evenly between my “football” bags.

The white chocolate was melted in a glass bowl in the microwave, then drizzled over the top of each bag of popcorn.

Another option is to place all of the popcorn in a large bowl and drizzle the white chocolate over the top and mix it all together. Then divide into your individual bags.

More about those bags in a minute…

The “football” cupcakes were made from store bought cake mix and baked according to the directions on the mix. You can use whatever flavor you like, because the frosting will cover the color of the cake.

I used store bought chocolate frosting, and spread it evenly over the top of the cupcakes when they were cooled.

The same “piping” technique as the previous 2 recipes was used for the football threads.

I put coconut in a sandwich bag and a couple of drops of green food coloring, then shook the bag around until the green coloring covered the coconut and spread it on the platter to resemble grass.

Store bought cake mix was also used for these cupcakes and baked according to the directions on the mix.

Again, what flavor of cake you use doesn’t matter. Just pick your favorite!!

These cupcakes were frosted with store bought cream cheese frosting that was tinted green with food coloring.

I spread the frosting smoothly over the top of the cupcakes when they were cooled and the piping was the same as all the previous recipes.

I added a bit of the colored coconut around the edges to resemble grass.

Since I used the same piping color and flavor, it made these quick and simple because my “piping” bag was filled with frosting and used for all of my desserts on this dessert bar.

The finishing touch to these cupcakes was a chocolate covered almond that resembles a football and I served them on my Nora Fleming platter with the cute football mini.

I chose a place in my home that would be easily accessable for guests to grab a dessert anytime during the game. For me, that was the dining table on my back porch. We have a TV out there and often sit there to watch games.

I used white platters to display them on, so the dessert took center stage and not the serving platter.

To make the “football” popcorn bags, I used brown paper lunch sacks. I cut the tops down just a bit, so they weren’t so tall and used white electrical tape to create the “threads”.

The tape was left over from my football tailgate party tablescape.

I hope you enjoyed seeing how to make an easy football party dessert bar! If you make one of your own, I would love to know about it. I love hearing from you!!

There are so many amazing recipes this month from my dinner club group, I hope you will pop over and see them all! Follow the links to go right to the posts.

Next up, is Jen from Midwest Life & Style, with a yummy Apple Cider Mojito!!

If you enjoyed this post, be sure and Pin It to remember it……